Windows 11, everything we know 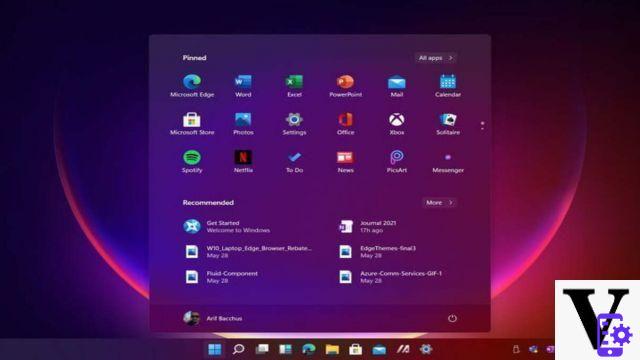 In the event that your PC is not compatible with the installation of Windows 11 due to the lack of integration with TPM 2.0, which takes care of securely storing cryptographic keys, passwords and certificates, as well as ensuring the overall integrity of the PC, you can solve the problem in a fairly simple way that we have already readily covered.

One of the main innovations of the new Windows will be the design renewal with the new Fluent Design, which will modify the graphic interface, icons and animations. In the past months there has been a lot of talk about this aspect and the news that we would see in Windows Sun Valley: in addition to a new UI, the new Windows should integrate a new clipboard accessible with the key combination Win + V, which in addition to having a chronology will also allow the insertion of Emoji and GIFs, will also offer the possibility of pinning the most used elements at the top and pasting the text without formatting.

Among the novelties there is also a new disk management system, characterized by a Modern interface and which will allow you to manage partitions and volumes directly from the settings screen, an improved system for battery monitoring and news for the task manager. In addition to this, the new Windows will also offer a better GPU management: On computers with more than one GPU, Microsoft will allow you to select which one to use for running various apps and programs. Users will then be able to manage whether to use the energy-saving or the high-performance GPU directly from the Settings app.

We will also find a Start Menu and a Jump List “Floating” on specific user customization, therefore no longer anchored to any vertex of the screen. The customizations would also include the ability to display more rounded and rounded corners, instead of the classic squared corners. The Microsoft Store, through which the company aims to favor developers by increasing the flow of money into their hands.


Speaking of graphical interface renovations, one of the most popular novelties will most likely be the function Windows Snap, which optimally simplifies the organization of the windows open on the screen, allowing the user to choose between four predefined layouts. In reality, this function was already present on Windows 10, but with the new update the procedure has been further simplified: to reorder the active windows it will be sufficient to place the cursor on the maximize button of one of the open windows and choose between the four models layouts available.

The most nostalgic and the last romantics will find themselves saying goodbye to a faithful companion, who has always answered present even when he was not called, and who has always represented one of the key elements of the Windows operating system: we are talking about Internet Explorer, which was officially removed by Microsoft to make room for the mode IE inside Microsoft Edge.

Another great news, which is sure to make video game enthusiasts jump for joy, is the exclusivity of the technology Direct Storage for Microsoft: if you install a high-performance NVMe SSD and the appropriate drivers, games will be able to quickly load assets directly into the graphics card's video memory without occupying the CPU, resulting in an incredible improvement in graphics detail, without having to pay the price of lengthening load times.

Just to meet the most skeptical and fearful, Microsoft has published the update again KB4023057, used to prepare machines for the arrival of the biggest and most important updates, such as, for example, the next generation of Windows, before release. As stated by the same company, this update "includes improvements to the reliability of the components of the Windows Update service in Windows 10, version 1507, 1511, 1607, 1703, 1709, 1803, 1909, 2004, 20H2 and 21H1" to "ensure that updates are installed without problems "and" help improve the reliability and security "of Windows 10 devices, as well as checking if the available storage space is sufficient to install the new operating system, and starting the" cleaning "operations in otherwise.


The increase in available space aims to be as least invasive as possible: Microsoft will simply make Windows 10 display a warning when the system is running out of space and help users free up memory on the storage device using the “Disk Cleanup” utility or through the “Free up space now” option in Settings / Storage.

In order for your PC to be able to guarantee you a good user experience, Microsoft has published the list of minimum requirements required for the correct functioning of Windows 11:

While waiting to install Windows 11, take advantage of Amazon's offer on this excellent 5.1 Bluetooth Mouse!

Windows 11, everything we know

Audio Video Windows 11, everything we know
How to enter the PC BIOS: the most used access keys ❯