Thanks to the map you see above it is possible See and Follow flight routes in real time on Google Maps.
Something that was unthinkable until recently, but now you can browse the airliners that pass over your head, in your vicinity or wherever you are in the world, all of it in real time, with the possibility of knowing all of them details.
You can see an example below, by clicking on any plane on the map you can find out: 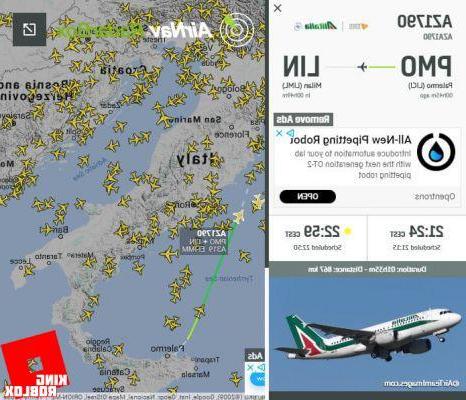 Also by clicking on the airports you can know all the flights that are arriving and those that are about to leave, by clicking on the plane you can know all the technical information on the plane with manufacturer, model version and much more.
All this becomes very useful, if we have to pick up someone at the airport and want to know when they arrive knowing only the departure airport and company or just to browse.
This web service is offered by RadarBox24 using Google Maps, allows us to know the flights not only that cross the city, but also Europe and the rest of the world, with the possibility of zooming in on the map and knowing the position precisely and with a few minutes of delay.
PlaneFinder in adthetion to offering this web service, it is present as App per smartphone e tablet Android e iOS, which you can find here:


Similar, if not even better service to RadarBox24 is offered by Flightradar24 which shows all the air route traveled, as opposed to PlaneFinder which shows only a short section covering the last 30 minutes of flight and has more options configuration also Flightradar24 is available as App other than Android e iOS, also for WindowsPhone e Amazon Kindle, however, for a fee, for this reason we preferred to include PlaneFinder as the first service, while for the Web part we prefer Flightradar24.
Here are the links to download the applications for your Smartphone or Tablet: 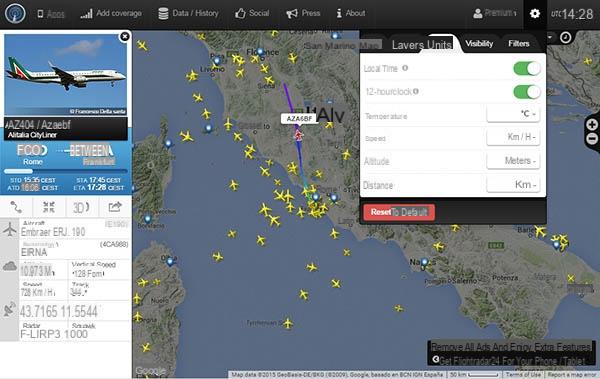 Another site with the same functioning is Flightaware.com, you should try it and choose the one you like best.
What you will see now instead is a delicious and unique thing (you will not find it anywhere else) that I came up with during the boredom of the flight departing from Dublin, to understand where I was even without the data network.
Before explaining how it works I leave you to the video I recorded from my smartphone:

I used two apps to do this:

First, when you are on the ground, connect with your data connection and open Google Maps. The aim is to scroll the map along the route in a straight line that your plane must travel for preload the map data. Example if you fly Rome - Milan, scroll the map between Rome and Milan at various zoom levels, in order to have the memorized map wherever you are along the route and at any zoom level.
Once in flight, we open GPS TEST, to lock the satellite signal you have to bring the smartphone to the window and wait for the GPS STATUS to turn green and the writing 3D Fix.
Now that you have locked on the signal you can scroll through the 4 screens, in one of which it is possible to know the speed you are flying to and thealtitude.
Now you can start Google Maps and click on the dot on the right to find your position and understand where you are, always keeping your smartphone near the window.
You can do all this by deactivating the cellular and wifi network and leaving only the GPS receiver enabled, which, as the word itself says, only receives data without sentheng it, as long as your smartphone allows you to do so.
If you have a chance to try this method, please leave a comment.

Audio Video See and Follow flight routes in real time on Google Maps
App for TV series: to watch them from smartphones and tablets ❯