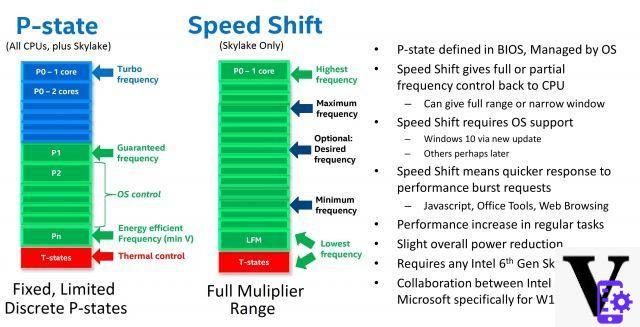 What exactly does Speed ​​Shift do? The Anandtech colleagues tell this, who have published an interesting study in the past few hours. As is known, processors equipped with Speed ​​Step technology constantly change their frequency and operating voltage depending on the workload to which they are subjected.

The operating system "requires" a particular level of performance, known as a Performance State or P-State, and the processor designed with several of these P-States tries to respond appropriately. To increase efficiency, especially in the mobile environment, the operating system may require lower P-states, but if the load needs more performance and there is a sufficient energy-thermal "budget", the P-State can change accordingly. .

With the Skylake architecture this behavior has been revised in its foundations. "The operating system can give frequency and voltage control back to the processor. Intel calls this Speed ​​Shift technology, "explains Anandtech.

As written in the opening, this technology is not active because Intel and Microsoft have had to work closely together to implement it in Windows 10. A patch - it is not clear if it is Threshold 2 - coming out this month will enable Speed ​​Shift.

Rispetto a Speed Step, Speed ​​Shift offers some benefits. First of all the processor can control the increase and decrease in frequency much more quickly with respect to the operating system. Secondly the processor has more precise control over their states, which allows him to choose the best performance level for a given operation, thus consuming less energy.

"Specific frequency jumps have been reduced to approximately 1 millisecond with the control by the CPU with Speed ​​Shift compared to 20-30 ms with the control of the operating system, and the transition from a state of efficiency to one of maximum performance can take place in about 35 ms, compared to about 100 ms of the previous implementation, "adds Anandtech.


In short, while Speed ​​Shift it does not increase the absolute performance of a system - those are related to the sum of all the components, as they have been designed and assembled - can give something more with short workloads, which require immediate and not prolonged performance increases. If you think about how computers are used, this is probably the most common scenario, from web browsing to traditional office work.

Anandtech has carried out some tests on a Core i7-6600U, a dual-core with Hyper-Threading that can accelerate from 2.6 to 3.4 GHz, but which in idle can go down to 400 MHz. The results are interesting, not incredible but of substance. , especially with operations "heavy but short" enough to allow Speed ​​Shift to make a difference. In short, in a word, the system should appear more "reactive". Other tests were carried out by Windows Central on Windows 10 Insider build 10586 and a Surface Pro 4, testifying that the patch is really in development and will not be long in being distributed.