Readers' PC: The Core i7-870 is still satisfying 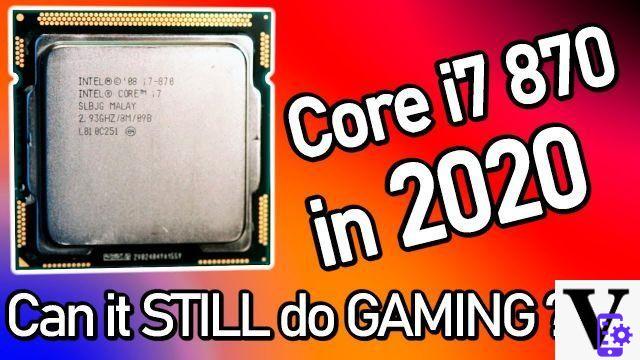 A few years later, Giulio decided to give a refresh to his dear PC, but given that a little because he was fond of it, he decided not to totally change it. "I tried to find the compromise between feelings and performance", he explained. He changed the RAM to get to 16 GB (Ballistix Sport DDR3 4x4GB at 1600 MHz), replaced the cooling system with an Enermax Liqmax 240 and bought a new Aerocool Aero-800 case to fit it all.

To these components he could only combine a 240 GB Sandisk Plus SSD to give reactivity to the system - although it is a basic SSD, the difference with a hard disk can be seen -, a new 80W Cougar VTX 700 Plus Bronze power supply and the card video, una Gigabyte GTX 1060 6GB G1 connected to a Full HD 60Hz monitor.

"There is no game that can't go above 60fps with my new setup, but I wanted to keep up with the new platforms and so I decided to overcloccare. I brought the CPU stably to 4,2 GHz (1,38V) with temperatures in the Intel Burn Test below 70 ° C. I also increased the frequency of the memories to 2000 MHz CL10 (1,5 volts). Finally I overclocked the GTX 1060 (even if these new video cards do not give satisfactions, as the old glories did) ".


"With this configuration the performance is similar to a system with the same video card and the same amount of RAM, but with a Core i5-6600K and DDR4 memory, and it gives me a score of 12013 on the 3DMark FireStrike," adds Giulio.

The PC is not always overclocked. When in standard configuration the reader claims that it is completely silent, with the CPU idle at 35 ° C and under stress at 55 ° C with the fans idling, including the radiator. "In overclocking the idle PC noise remains the same (the fans spin a little louder but the noise stays the same, and the idle CPU settles at 42 ° C). When I play in overclock, the PC is noisy but still at acceptable levels, and since I often play with headphones, I don't hear it. The maximum noise level reaches it when I stress the CPU with IBT or when a program uses 100% the processor, since the radiator fans are running at maximum and they are very noisy; but it happens very rarely. "

As for the games, Giulio tells us that his allows him to play at Ultra and 60 fps in Full HD (Shadow of Mordor, Fallout 4, GTA V, Metro 2033), also thanks to the GPU overclock that does not exceed the 80 ° C with fans in the car ".

"Lately I tried to push the processor even further, finding stability at 4,4GHz at 1,4V. The temperature rose by about 5 ° C, still remaining in a safe range and with the same noise as my previous overclock. This setup, however, I would like to use it only when there is really a need, it is not for daily-use ".


Before intervening on the platform, Giulio intends to cchange the case and radiator fans, to take better performing but also quieter solutions. "Then I would like to change the heatsink to try to further lower the CPU overclock temperatures. And, if you buy a larger monitor (32-37 inches) to use as a monitor only for games and movies, opt for a GTX 1070; but my finances currently don't allow it. "

How much does Giulio's PC cost?

The presence of very old components does not allow us to do a full calculation of the PC price, but you can take a look at the Aerocool Aero-800 case and the Gigabyte GeForce GTX 1060 G1 Gaming 6G video card.

How to participate in "The readers' PC"

Send an email to manolo@windowsforbegginers.com listing the components of your PC, attaching the best quality photos possible. Describe performance, noise, overclocking, and add any information you deem appropriate. Mail that does not contain what is necessary will be discarded.

Readers' PC: The Core i7-870 is still satisfying

add a comment of Readers' PC: The Core i7-870 is still satisfying